There have been alot of comments from people saying that nobody could have defended that goal. Lee Keegan is as strong and athletic as Con O Callaghan, so it had to come down to poor defending or smart forward play.

If  you look at the O' Callaghan Goal from behind the goal, you can can see that O' Callaghan makes what is referred to in basketball as a Back Door Cut, and Kilkenny plays the Back Door Pass. Any of the top forwards in the country would have made the same back door move, so it was Keegan's poor defensive position that contributed to the chance.

I have outlined a better defensive position Keegan should have taken up. Why is this better?

1. To receive the backdoor pass, O Callaghan would have had to run through Keegan, which would have made him think twice

2. It would have forced O Callaghan towards the corner to receive the pass. Not the most threatening position on the pitch

3. Would have forced Kilkenny into an extra touch, which would have given time to get contact on him

The other factor was where was the rest of the Mayo Defence? They had switched off, as the referee had given a very "soft" free for Jack Mc Caffery at the other end, after Paddy Durkins shot had hit the crossbar. 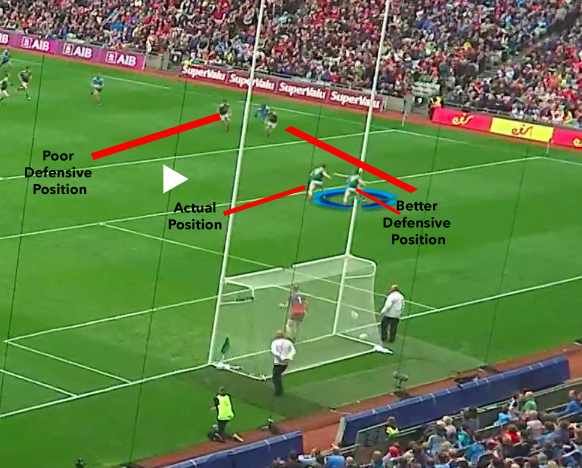